We have been advocating for Insurance Reform for this sector for over three years. Insurance has long been an issue for artists, but it really came to a head in 2017 when the UK underwriters started to withdraw from trading in Ireland, leaving only one provider for the teaching of aerial skills. Subsequently the costs for same went up by five times in less than a year, even with no claims. That underwriter (Lloyds) has since withdrawn, leaving not a single provider for the teaching of circus skills, in particular aerial, or anything which is off the ground by more than 1.5 metres in Ireland.

This leaves many artists and organisations at risk of two things:

Neither of these options ISACS condone and are devastated to say that this is the reality facing us now. We have worked very hard to grow and nourish this sector and have seen it flourish, with the emergence of several artists supported through the Arts Council Next Generation, Creative Ireland and other such state supported programmes; who are aerial artists and who would not exist without the possibility of training in aerial skills in Ireland.

The impact of Lloyds leaving Ireland has had a catastrophic effect on the leisure, tourism, hospitality, construction, cultural, community and voluntary sector right across Ireland.

There is an urgent need to put in place a temporary solution for those who are watching their organisations close, despite all their best efforts.

We, in ISACS, have exhausted every channel in Ireland, the UK and further afield, in an effort to get cover for our members. Additionally, we have met the Departments of Finance and Culture, Heritage and the Gaeltacht, the Arts Council, the Local Authorities as well as others, but to no avail as yet.

Galway Community Circus (GCC) are a Youth and Social Circus organisation operating in Shantalla, in Galway City. They work with over 650 young people every week, training them in physical and creative activity with an emphasis on safe risk taking and team work. They are members of the EACEA funded International Youth and Social Circus Network, Caravan, based in Brussels.

In 2016 the insurance premium for GCC was €4,500 which jumped to €15,886.50 in 2017. In 2018 they managed to secure cover with a UK based company – Rees Astley. This company has since withdrawn from the Irish market. In 2019, after months of endless hours of research and negotiation, they have been able to secure just one quote for insurance cover for €23,890. Unfortunately, this excludes any aerial acrobatics or any activity above 1.5m. They have been forced to accept this quote until they find a more suitable long-term solution to keep their doors open and protect their over 20 employees.

Currently GCC are working towards developing one of the flagship projects in the Galway 2020 European Capital of Culture programme. The project: Wires Crossed: A Balancing Act for Europe is due to be presented next August. A world first, it aims to address issues of mental health, suicide and personal wellbeing through funambulism, the art of tightwire walking. This wonderful project aims to train over 400 people from all across Europe in the art of funambulism. Galway Community Circus has secured additional funding of over €800,000 from European sources for this project, in addition to the funding given through Galway 2020. While all their European partners have insurance to continue with the project, the participation of local people in Ireland is in jeopardy unless GCC can secure a suitable insurance cover.

Early in 2018 a new body – the Alliance for Insurance Reform was formed to bring together all the diverse sectors affected by unsustainable insurance increases or lack of adequate insurance product. These include: ISME, Irish Hotels Federation, Restaurants Association, the Wheel, Irish Road Haulage Association, Irish Travel Agents Association, Irish Adventure Tourism, Sport Ireland, Childminding Ireland, Nursing Homes Ireland, the Federation of Irish Sport, the Union of Students in Ireland, the Irish Concrete Federation, and many more. The Alliance has worked hard to bring in long term and radical reforms for the country.

Some reforms have been very slowly coming forward and while they are much welcomed, they are simply not in place as of yet, leading to an exodus of the UK underwriters as mentioned and therefore the above problem.

Together with the Alliance, we have focussed on four key actions in this period in order to leverage progress quickly.

Key elements of the Judicial Council Act were commenced on September 9th. The Judicial Council has recently been established by Min. Flanagan and we await for it to appoint a personal injuries guidelines committee. This committee shall have regard to the “principles for the assessment and award of damages for personal injuries determined by the High Court, the Court of Appeal and the Supreme Court”.

These principles should be: “Modest injuries should attract moderate damages” Damages should be proportionate in the context of a cap on general damages for catastrophic injuries of €450,000 “Common sense and a degree of scepticism” should be applied to personal injuries claims
Minister of State Michael D’Arcy has informed us that in parallel to the appointments process, he hopes the Judicial Council will see fit to review general damages for minor soft tissue injuries with a view to having draft revised damages published by the end of this year. We will be keeping a very close eye on this process.

The recent budget saw the government committing funds towards the establishment of this unit. This is precisely the type of unit we need, to coordinate the Garda response to insurance fraud, with specialised trained staff, operating from the NECB, taking in all insurance fraud complaints in the first instance, assessing them and then dealing with them directly at the NECB or referring them back to Divisional Fraud Units as they are established. This must not be delayed.

Review and re-balance the “common duty of care” to require the occupier to take a duty of care that is reasonable, practical and proportionate

4. Get the insurance industry, via the Department of Finance, to quantify the scale of premium reductions for all the reforms that are being pushed through

The Department of Finance continue to work on this with Insurance Ireland. We need the Insurance Industry to commit to reductions upon the impact of these key reforms. We await results.

Here is an Infographic for a clear idea of the scale of the problem: 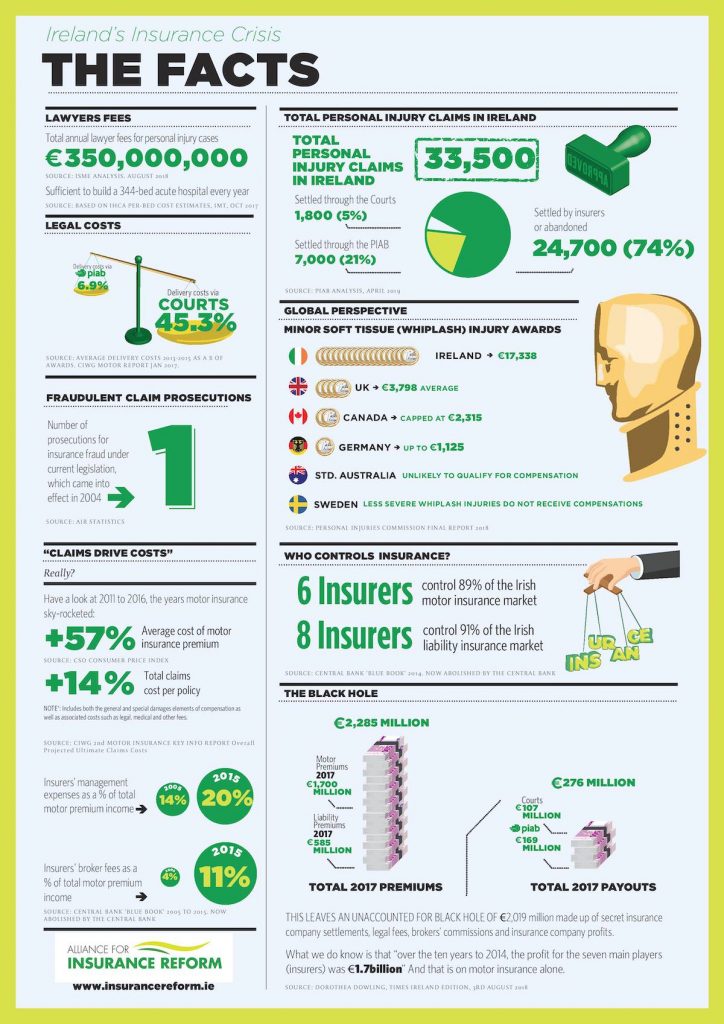